Why Use Ruby On Rails? Top 5 Reasons 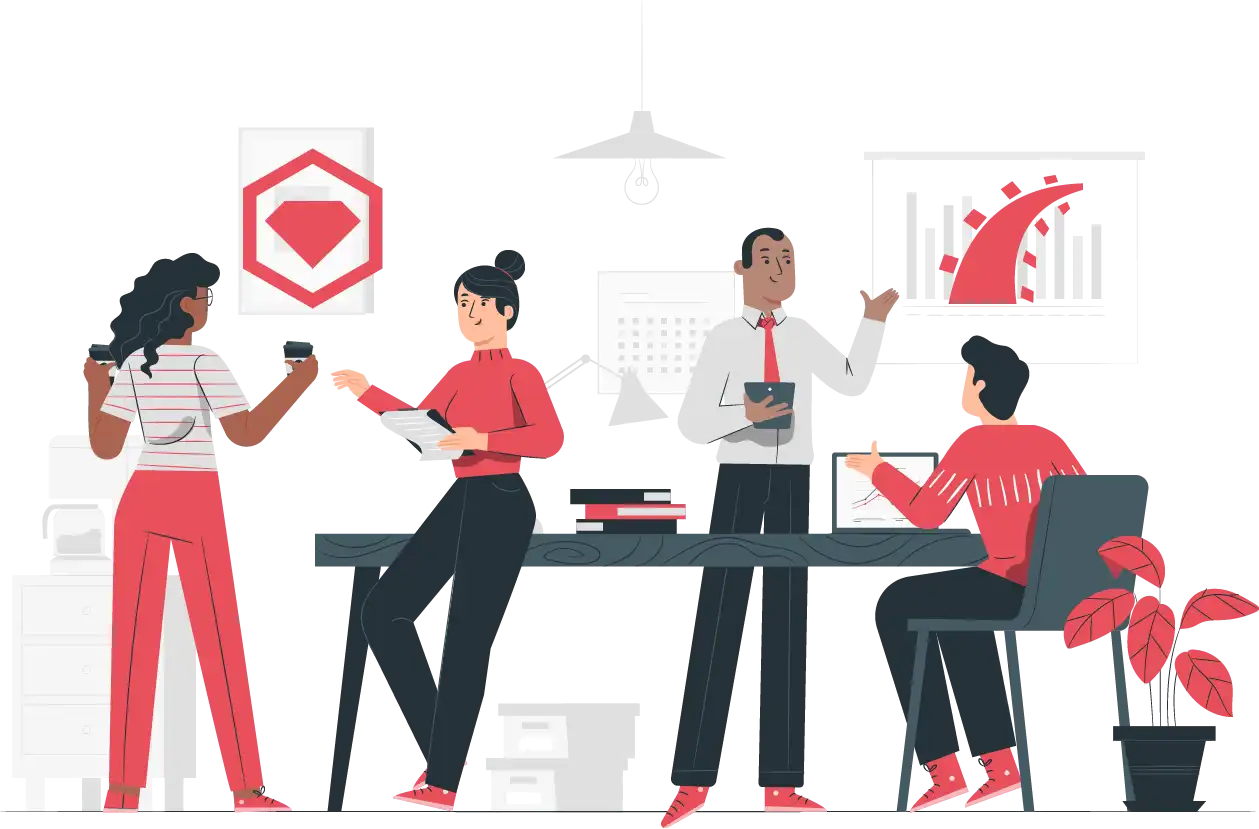 I am sure most of you who are familiar with website development must have heard about terms such as Ruby or Ruby on Rails. In short, Ruby is a popular programming language and Ruby on Rails is its framework and the purpose of Ruby on Rails is to build interactive web applications.

An estimated 380,996 global websites have been built using the RoR framework as of March 2021 and on 199,681 unique domains. These stats clearly reveal the wide and frequent adoption rate of RoR. So let’s learn what is ruby and ruby on rails?

Additionally, it offers more than 60,000 libraries with multiple frameworks. Most importantly, it is a dynamic and free format language, meaning you can start writing code from any line or column.

Some additional features include:

What is Ruby On Rails Programming or RoR?

On the other hand, the Ruby on Rails framework, also known as Rails language, was created back in 2003 by David Heinemeier Hansson, while he was working on the code at Basecamp – a project management tool. He officially released rails in July of 2004 (that’s how old is ruby on rails) as an open-source programming language and it has been becoming very popular for web development ever since.

It has been favored by both developers and startups looking to develop world-class intuitive products. The main reason is – it offers one of the most fertile means of building websites and app programming of server-side applications. Also, its popularity is fueled by its agility and speed of development. This framework has more than 45,000 stars on GitHub.

How Popular is Ruby?

According to Stack Overflow Developer Survey 2020, Ruby was named 14th most popular programming language in the world with 7.1% of respondents being Ruby on Rails developers. Wondering who uses ruby? 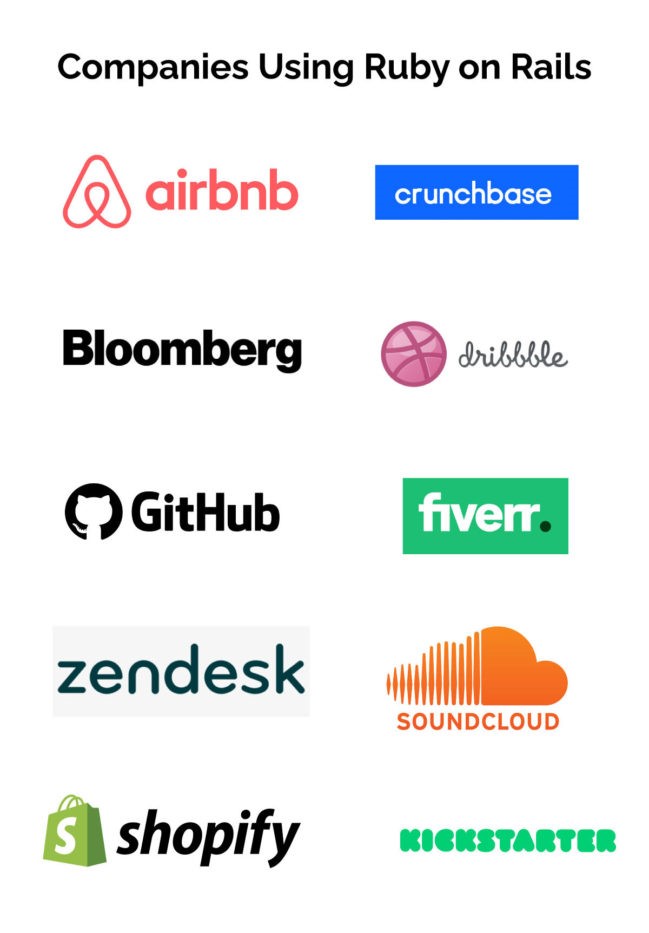 Additionally, Ruby on Rails programming language is an MVC (model view controller) based framework which is an architectural pattern that separates the web application into model, view, and controller. Where Model is all about data-related logic, view corresponds to UI logic, and lastly, controller represents the interface between the model and view.

What Can I Do With Ruby On Rails?

You may wonder, when to use ruby on rails or what can ruby on rails be used for – well, this section is going to tell you about the platforms that you can effortlessly build using RoR:

Recommended: ARTIFICIAL INTELLIGENCE IN ECOMMERCE: HOW CAN YOU INTEGRATE IT?

Why Use Ruby On Rails – Top 5 Reasons

Now comes the most important question – why choose ruby on rails or why is ruby on rails popular? To understand this better, let’s look at some of the advantages/benefits of ruby on rails over other languages:

As we all know, cybersecurity issues have skyrocketed in the past few years and more so amid the Global Pandemic majorly because of weak systems and lack of cybersecurity practices in place, thus making the systems vulnerable to outside attacks.

In addition, Cybersecurity has become the main concern for both individuals and companies now more than ever before. Speaking of, the rails programming framework has massive security capabilities that will ensure your and your customer’s data is protected at all times. It includes a password and other credit card-related data encryption.

Plus it can also protect from SQL injection and XSS attacks, cross-site scripting, and request forgery. Therefore, if you are aiming and rooting for security, choosing RoR is the step in the right direction.

Now, who doesn’t like simple things? Things that are easier to understand or play around with. Similarly, one of the many reasons why you should choose Ruby on Rails is because of its simple syntax which is not only easy to understand but also leads to high levels of usability for developers.

So if you are wondering, how hard is ruby on rails to learn then know that it’s not that difficult. It involves writing less code which makes the development process not only easier but also super fast. Moreover, developers can transition from one project to another RoR project without a hitch if they know the basic rules and fundamentals of this framework.

Last but not the least, it takes home the cake for its high readability capabilities.

When choosing a programming language, community support matters a lot. Because the bigger the community, the better the resources available for developers to surpass challenges. Approximately 4,000 coders are contributing to the progress of Ruby on Rails on GitHub.

The developer community assists each other to develop top-notch RoR framework-powered projects. Surprisingly, there are ready-to-use code packages called ‘Gem’ (free open-source libraries) which are provided by developers to seamlessly integrate and speed up the development process.

Moreover, RailsConf is organized from time to time by the RoR community for RoR developers, where they can come together to share their experiences, lessons learned, and opportunities. Finally, manuals, guides, and courses are available in abundance for educational purposes.

Active community support is a contributing factor towards its development speed. As mentioned earlier, free open-source libraries Gem has reached 48 billion downloads. These ready-to-use library extensions and utility classes provide both a reasonable solution and also save time otherwise spent on writing long lines of code.

Additionally, Ruby not only offers a lean code-base but a logical one too, that also accelerates the entire process.

Ruby on rails software development is highly scalable. Even though Rails was criticized for its scalability issues, after the release of Rails 6 back in 2019, the issues were clearly resolved.

On top of that, this ruby web application framework is quite flexible as it adapts to the updates without a sweat. Plus you can find distinct modules in case you miss a functionality. Not just this, it allows you to individually modify the parts of an application.

Recommended: SPRING4SHELL IS HERE: ARE YOU VULNERABLE TO IT (2022)?

Find some of the important developer skills for web application development using ruby on rails:

Companies are now looking for hip technologies to get the job done faster and to solve challenging problems. Therefore the future of Ruby on Rails seems quite promising.  As it is consistently used by companies to meet the rising demands and also to stay ahead of the curve.