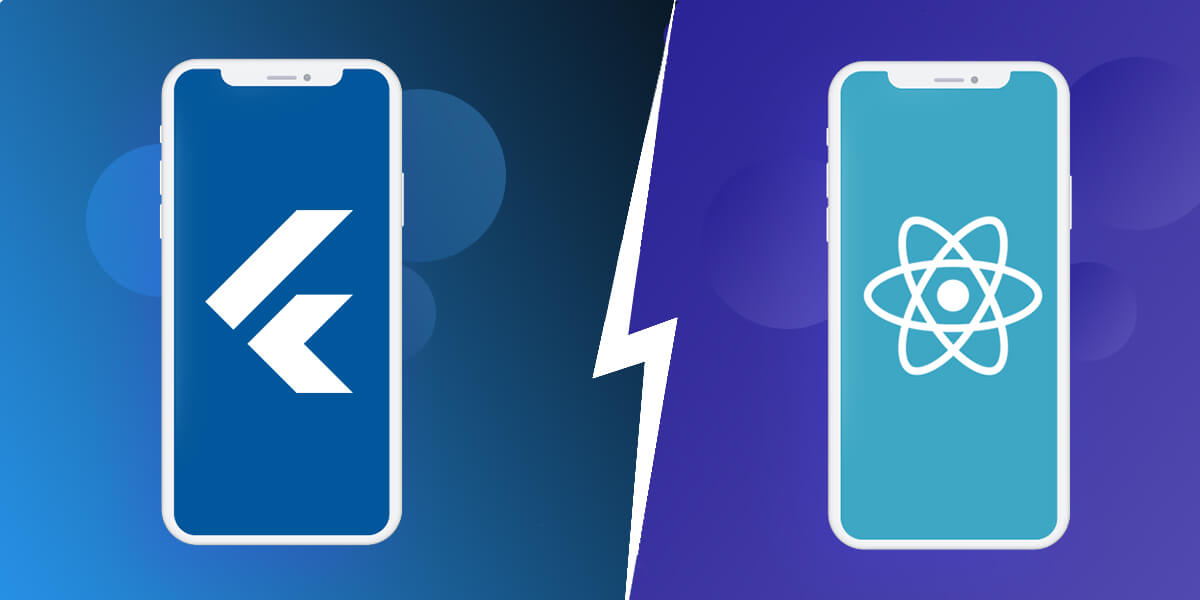 Mobile app usage has broken all the records over the years. In 2022, around 6.6 billion people will be using smartphones, marking an annual increase of 4.9 percent, according to Oberlo. Similarly, smartphone users spend an average of 4.95 on mobile apps as of the 2nd quarter of 2022.  These stunning figures imply that the mobile app market is still on the rise and has a low penetration rate because people spend more time on their mobiles than on desktops.

Our lives have become aggressively tangled with technology that accessing everything from the palms of our hands has us singing praises of the mobile app development industry. Finances, education, games, eCommerce, entertainment, and businesses have all jumped on the bandwagon. Hence, it is no coincidence that this sector is in high demand and under constant pressure to deliver innovative software products.

Certainly, native apps for iOS and Android are expensive, time-consuming, and complex to develop and maintain. Therefore, businesses avoid sailing the native app development boat. These circumstances pull the curtains for Flutter to enter the scene.

Since its inception, Flutter’s mind-blowing capabilities have set skyline as the limit of success for cross-platform apps. If we are to compare Flutter vs Native app development, both are highly scalable and provide satisfactory customer experience, but they share differences that make it difficult for many to choose the best tech stack.

ARFASOFTECH has conducted an analysis on Flutter vs Native app development. So, if you have questions and tech-gibberish has you face-palming, dive in because we got what others lack—simpler words.

Flutter works on the principle, “Write once, run anywhere”. It means your development team has to write one set of code that can be deployed on any platform. Therefore, it didn’t take long for the Flutter framework to rise to popularity since its mega inception in 2017 by Google. As of today, 42% of software developers choose to work on Flutter, making it one of the most iconic front-end frameworks.

Despite being Google’s golden boy for developing a cross-platform app, Flutter is a convenient toolkit. It delivers quality user interface (UI) components and smooth animations while operating on the Dart programming language. Hence, you can write high-performing applications on Flutter that operate like native iOS and Android apps.

In contrast, Native app development is platform-specific. You can craft an Android or iOS app. Also, the device’s operating system vendor decides which programming language is suitable when you are planning to develop native apps:

Native apps, on the whole, have few limitations, and their users may take full advantage of sophisticated capabilities like an accelerometer, camera, GPS, and so on. Users may download native programs from major app stores like Google Play and App Store.

There are speculations about the future of the mobile app development paradigm. Tech geeks at ARFASOFTECH often held conversations around the question,

There is no one answer to this. But one thing is certain. Software developers cannot ignore the shining armor of Flutter when they encounter a code blocker during the native app development process. 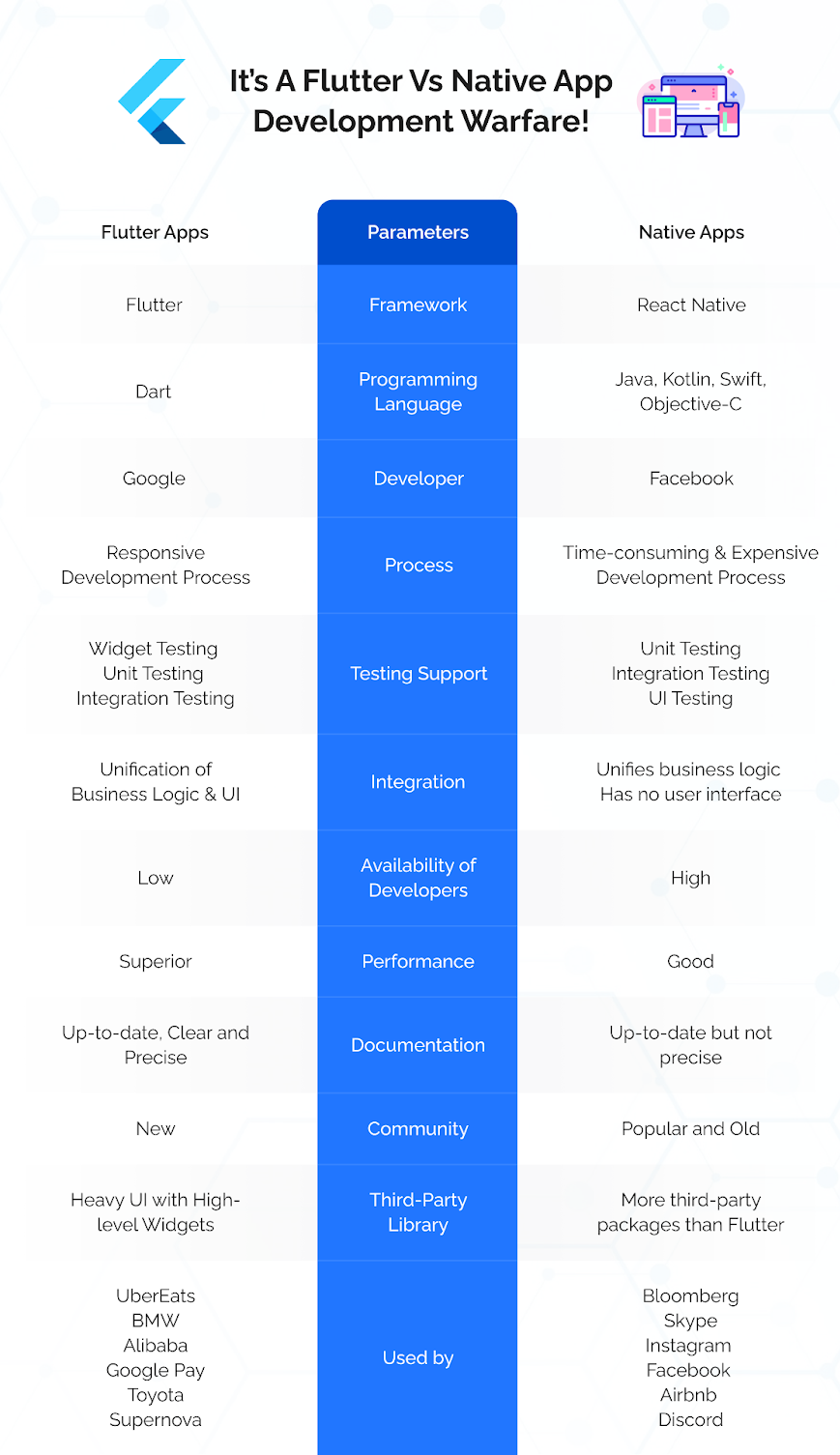 In contrast, a Flutter app development company sleeps peacefully at night. As there is a single code base for every platform, it is easier for developers to resolve issues, support third-party libraries, and integrate external tools. To put emphasis, developers have been grateful for its features “hot reload” and “hot restart”.

The former lets you see UI changes immediately, decreasing the waiting time. Eventually, developers and designers can sit side by side and introduce new layouts in real-time. Comparatively, the latter obliterates the current app state and rebuilds it to default. For this reason, you can check the business logic changes faster than on native platforms.

You will receive splendid support to test native apps. Using Gradle, you may accomplish the testing process via Android Studio or the command line. You may also include unit, integration, instrumented, and user interface tests in Android applications.

Frameworks that are written in both Java and Kotlin support lower-level testing. In like manner, the Espresso framework supports UI testing. You can utilize the Mockito framework to mock things, and you'll receive a lot of help along the way.

Thanks to Google Flutter's strong testing framework, you can create tests at the unit, functional, and user interface levels.

It has an interesting feature called Widget Testing. It enables you to conduct user interface tests as quickly as unit tests. In addition, flutter has thorough documentation, which makes it easy to understand how to test apps with Flutter.

Running these tests will put the arguments on Flutter vs Android Studio to rest and give you a hand on experience between their good and bad aspects.

Kotlin is a prominent object-oriented programming language, which is heavenly prioritized among developers. Because the language is comparable to Java, it is simple to learn or transition to. The same can be said about Dart, which is used in Flutter. However, there are fewer Flutter developers.

The primary distinction for businesses is that Flutter enables the unification of business logic and UI and the usage of a single code base for two platforms.

On the other hand, Kotlin can unify business logic but has no user interface. Flutter delivers superior tools, such as development environment plug-ins. Whereas the capabilities of Kotlin tools are restricted, debugging with them is currently nearly difficult.

Furthermore, incorporating distinctive elements of third-party plugins or libraries is not difficult with Dart. However, developers unfamiliar with Dart's capabilities may find it tough.

Furthermore, by default, the Flutter engine has specific constraints for integrating native modules via Xcode of Android Studio. The documentation for Flutter contains comprehensive instructions for dealing with any issues and effectively integrating it for Android and iOS.

Let’s march to the “Flutter VS Swift” debate. Swift is still one of Apple's most popular iOS programming languages, and many developers commend it for its excellent frameworks and documentation. Compared to Flutter, the connection with Swift iOS is simpler and requires less configuration.

Nevertheless, Swift may have poor integration with certain third-party technologies. Hence, replacing native app development frameworks and languages with Dart can be viable for you. Why so? Dart's code is compatible with a variety of platforms, including Android. Moreover, Flutter allows for speedier code creation, making it an ideal alternative for MVPs.

The job market for Flutter technology was extremely rare two or three years ago. Thus, most developers were new to Flutter. The main cause was a global shortage of Flutter projects.

As a result, assembling a competent team of more than 5 Flutter engineers took some time. The situation has altered today. Many developers have gained valuable expertise working on large projects during the last few years.

Likewise, ARFASOFTECH Flutter teams' professional experience has also risen in sophistication. It is not enough to learn Dart and write a few examples to begin a full-fledged Flutter project. This dilemma urged teams to receive expertise in full-scale projects. As a result, assembling a competent team has become easier.

If you want to witness the talent of our team before continuing a long-term engagement, schedule a 7-day trial that begins with a Free Consultation session. Our developers are bound to create greatness, and do not hesitate to provide 24/7 support.

In the race of frameworks, the latter has set the record with a 12.57% response rate. However, Flutter (12.64%) took the lead with a difference of 0.13%, according to Stack Overflow Developer Survey 2022.

Although the margin is quite thin, it would not be wrong to say that Flutter is replacing React Native. This JavaScript-based mobile app framework allows you to easily build natively-rendered mobile apps for iOS and Android.

Industrial leaders and tech visionaries such as BWM, Google, eBay, Alibaba Group, Square, ClickUp, and more are building customer-centric apps with Flutter. They are rapidly adopting Flutter to capitalize on its scalable features and integrations.

The goal was to allow teams to work autonomously, developing the mobile app and delivering value on a single architecture, programming language, and set of conventions.

As demand for Flutter app development increases, the availability of developers will flourish along with its toolkit sophistication. Hence, nib all your hesitation and actively invest in Flutter’s cross-platform app development projects because everything points in the direction of success.

What is Flutter app development?

Flutter is a frontend framework that requires a single codebase to support web, mobile, and desktop functionality. It is Google’s UI toolkit that builds creative and natively-compiled applications.

What is Native app development?

Native app development refers to creating an application that is designated for a specific platform, such as Android and iOS.

Why should I choose Flutter over native development?

With Flutter, there is only one designated team, which ensures better communication and time management between departments and reduces estimates for future features. Also, it comes with ready-made and built-in widgets that ease the development process.

How much does Flutter app development cost?

The cost of Flutter app development depends on various factors such as budget, timelines, number of sprints and developers, features and functionalities, and complexities.